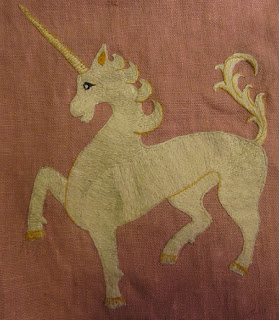 ...or, at least it's almost finished. The actual unicorn is done, but then of course I will be a lot more work later when I attach it to the dress. Then I have plans for even more embroidery which will go on the same outfit... But for now I'm happy. It's a bit too cute and princessy but together with the rest I think it'll work just fine.

If you didn't read my earlier post about this embroidery and the 14th century original, here it is. 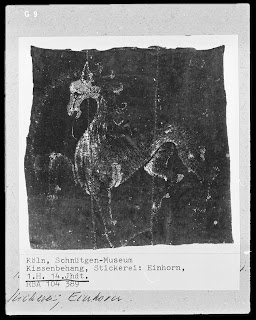 My version looks quite different despite my attempts to follow the original closely. As I mentioned before I had some trouble with the head, where the lines were drawn just a mm outside of where they should be, resulting in the head looking 'thicker' than the original. I really wanted to fix that but I couldn't, not without redoing the entire head. But other than that... Well obviously I had to create the parts that were too worn off to be seen in the picture, and I chose to add the same kind of tail and horn as can be seen in other medieval unicorns.
Posted by Fanny at 12:58 PM