I'm still not feeling well, so I'm spending one more day in bed (or rather, on the sofa) with a runny nose and a throat that feels like it's been jammed with a cactus. At least this gives me time to plan ahead! Yesterday I came to the conclusion that a peplos is what I should wear this weekend in Gamla Uppsala, and since I don't actually own one I will have to sew one. At the moment I'm hoping on getting down to the fabric store tomorrow for some nice wool (I just hope I find something good!) and I'll have two days (or rather, evenings) to sew. Which really shouldn't be a problem since it's such a simple design. 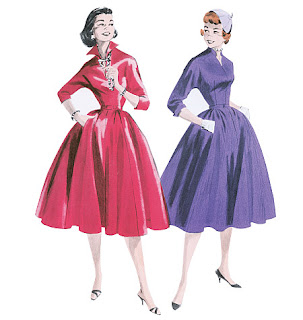 Then in just three weeks or so my cousin is getting married (hurray!), and I've decided on sewing a new dress for the occasion. Scary, since I've never actually sewn anything like it, I'm just used to the medieval stuff! The pattern is this one from Buttericks, the version to the right. Last night my wonderful friend Cissi came over to help me make a toille, which I wouldn't have managed on my own. So thank you Cissi!

Not actually having the energy to do anything else about it right now, I've just been looking through the sewing instructions. Once again, it's scary! Plus I just realized that I have completely missed that I need a lining fabric so I'll have to look for that too, once I get down to the fabric store... I absolutely love the fabric I bought for the dress, a pale golden brocade with a bit of 18th century feel to it. Underneath I will have a fluffy petticoat which is at the moment only half-way finished. I completely underestimated how long it takes to sew ruffles! (It's been too long since my dancing days, when we put ruffles on all of our stage clothes...) Now I just have to find a suitable lining fabric that fits in with the white-golden colour scheme.

So that's what's on my mind right now. Feels like a LOT of work, but it really isn't that bad, since the peplos should take just a couple of hours to finish. And of course I'll show you the end result as soon as I can!
Posted by Fanny at 2:28 AM