This weekend the Gamla Uppsala Muesum (yeah yeah, most people say Old Uppsala in English but frankly, I find it silly to translate place-names!) hold an Iron Age event and we are planning to attend together with a couple of friends. That, and a nice little phone conversation I had with Ida got me thinking about Iron Age fashion, the problems of Viking Age clothes (more specifically the female clothes) and purely practically speaking... what I should wear in Gamla Uppsala. 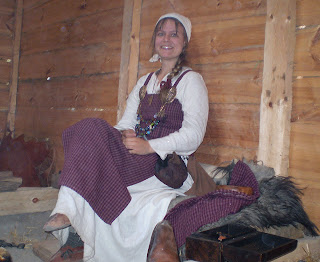 A couple of years ago I made a couple of  Viking Age outfits according to the nowadays traditional interpretation: simple, long dress in linnen underneath and an apron dress in wool worn above. Why? I'm sad to say it was just because that's what people (fellow students, archaeologists and generally crafty people) told me was most correct. Sure, I knew that there were other versions as well but to be honest, I didn't really look into them at the time.

Just a few years later I listened to a very interesting lecture by Dr Annika Larsson about her interpretation of the textile finds from a certain burial in Pskov, Russia. If I was to retell all of her theory this post would be way too long, so I'll settle for showing a picture. If you're familiar with the normal apron dress-type of dress I know this looks weird and wrong, but after hearing Annika's arguments and looking at pictures of the textiles from Pskov, I gotta say that I think she's onto something...

It is however very important to note that Annika never claimed that this was the only outfit used by Viking Age women. No, her interpretation is that this is an outfit for very specific events, probably ceremonial. So all those who refuse to accept this theory based on the "but that would be SO unpractical when you are working in the field" argument can just go away, please. =)

What the everyday Viking woman still makes me feel highly uncertain. Flipping through my old copy of Viking Clothing by Thor Ewing I found myself once again considering the more odd possibilities. For example, have a look at this carving from Oseberg (from the cart!).
"Around her neck hangs a very long double string of beads, and instead of the brooched dress, she wears a skirt and a blouse. The skirt appears to be belted at the waist and hangs in folds around the back: the front of the skirt is either covered by an apron or, more likely, hangs flat like a kilt front, and it appears to be patterned. The waisted, patterned skirt is strongly reminiscent of the shorter garment from Huldremose with its drawstring gathering." (Ewing 2006:46) 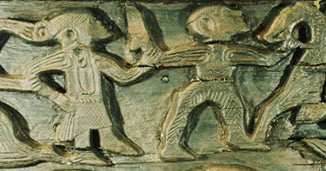 I find this horribly interesting! If you've ever seen a reconstruction of this outfit then please tell me, because I'd love to see one! Now if you look at the male figure next to her... doesn't it look like he is wearing a sort of waistcoat? Either that or only the sleeves are pleated, with  a smooth front. However, if you'd accept the interpretation of is as a waistcoat, then what is there to say that the woman isn't also wearing a similar garment, seeing that she too has pleating only on the sleeves but not on the front! Probably not, but I still think that there are more possibilities than the one Ewing suggests, and I'd love to hear your thoughts on this as well. 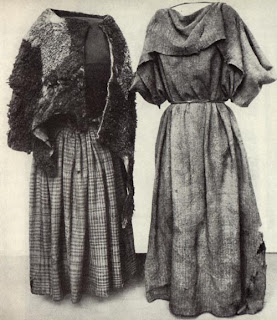 Considering the difficulties in interpreting the female Viking Age clothes, I'm not sure I want to wear my old apron dress to Gamla Uppsala. Continuing to wear it would only solidify the general view of it as 'the' Viking Age dress, and I'm not sure I want to be a part of that... So what to wear? One possibility is to make a simple garment suitable for a slave woman, sleeveless and probably only kneelength (Rigstula describes the slavegirl as having tanned arms, suggesting a dress without sleeves, and there are pictures of simple dresses only reaching down to the knees...). Or I go for something completely different! The event isn't Viking Age, it's Iron Age! So why not come dressed in an outfit from the early Iron Age? The marvellous finds from Danish bog bodies offer enough textile remains for a good reconstruction! Then as far as I can tell, I should probably make myself a peplos or a waisted skirt like what they have found in Huldremose, Denmark. Since a peplos seems to be the easiest to make (I only have a few days and lots of other stuff to do as well!) I think that's what I'll choose. That, and the fact that I can't find ANY pictures of the other outfit where you can actually see what's worn below the cape. A tunic? A dress that stretches down below the skirt? Nothing? *giggling* Well... since my mind seems to be going around in circles I think I'll just stop this rambling. If I can just get rid of this horrible cold that's been keeping me in bed I'll go get some nice wool for a peplos. And no, I wont have time to sew it by hand, so don't even think about it!

Have a great day and as usual, I'd love to hear your thoughts on this so feel free commenting!