Late 14th century illustrations - help me figure this one out! 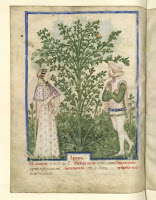 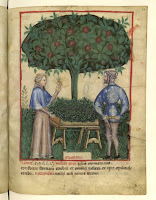 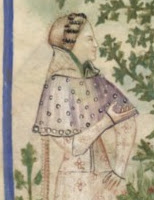 First, I noticed this pretty lady whose outfit got me wondering. The lines seen around her arm and wrist as well as around her waist are just seams, or she is actually wearing a tight jacket of a sort, over her dress! Sewn in the same fabric as the dress, yes, but only reaching to her elbow and opening in the front. My first thought was that no, the lines are probably just the seams of the dress... But that doesn't really add up, does it? Ever seen a 14th century dress with seems like that? With no other seams at the skirt or anywhere else? And looking at the other garments from the same illustrator you can't really see seams like that either, can you? No, I can't see it as anything other than a separate garment.

Next, have a look at the hood. What a pretty chaperon, with a contrasting colour on the part covering the shoulders... But hang on, is this really a normal chaperon? Doesn't the colour of the hood and the shape of the front (under her chin) suggest that it's not actually attached to the purple cape, but to the garment below? Could this in fact be a hooded jacket of some sort, worn underneath a short cape? 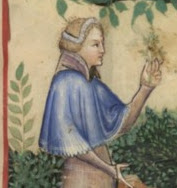 Now look at the next picture. Look at the hood, matching her dress rather than the cape. Now I don't feel like suggesting a hooded dress, but it sure does not look like the hood at all connects to the cape, right? Or am I just imagining things here?

Lastly here is a third lady, wearing something rather different. She does however seem to have a hood like the ones we've seen before, but without the cape part. Generally, this lady's outer dress is pretty interesting (I have some trouble figuring out how it all fits together), and once again the hood could actually be a part of the outer dress rather than being a separate piece... But I'm not sure, this outfit gets me a bit confused.

In conclusion, I really don't know how to interpret these outfits. First, the possibility of a tight jacket worn over a dress... Have you ever seen anything like it? I don't think I have, but on the other hand I haven't really been searching for it either so I'm not sure. Then, have you ever seen the hood of a chaperon being attached to a jacket or a dress? Do you think it's a completely ridiculous idea or might there be something here for further research? And when it comes to the third lady here... sigh... can you make sense of it? With wide sleeves and tippets from just underneath the shoulders?

I'd love to hear your thoughts on this so please write me a comment! Do you see what I see or am I just a bit crazy here? The pictures are dated to 1380-1400 but unfortunately I haven't been able to find further information, but perhaps you know more?

And thank you for reading such a long post!
Posted by Fanny at 5:58 AM