A new show is airing on tv here in Sweden, in which a bunch of americans rediscover their Swedish ancestry. Watching the show ("Allt för Sverige", which by the way is great!) has brought up thoughts about my family history, and I've been looking a lot at old pictures from the early 20th century. I find it interesting in so many levels! Obviously, since I am interested in historical fashion I look at their marvellous clothes. Then I think about their experiences, their lives and how they really are no different from us. I try to get a sence of their personalities, their quirks and interests... And how they in a way are a part of me. 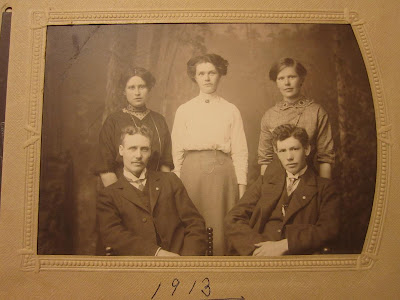 As you can see, this picture was taken in 1913. The young lady to the left is my grandmother's mother Anna Eriksson, and sitting right in front of her is her husband Axel Eriksson, my grandmother's father. He was a fireman (and part time shoemaker!) and lived with his family in Uppsala. 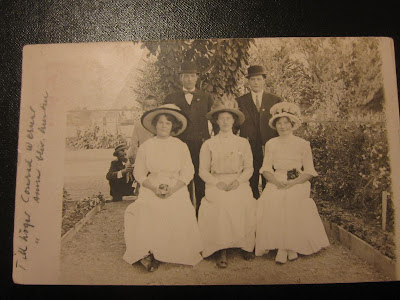 Have a look at this postcard. Axel's brothers Conrad and Werner emmigrated to America in the early 20th century, and in 1912 this postcard was sent from Palo Alto, California. The photo shows three lovely ladies and two very handsome gentlemen. The text text to the left explains that the man to the right is Conrad, and the lady on the far right is his future wife, Anna. Gorgeous, isn't it?!
I am also a bit fascinated by what is going on in the background of the picture... have look at this closeup. A boy who obvisously wasn't supposed to be in the picture is standing behind them, looking at what's going on. And behind him a man is crouched on the ground, doing something. Might he be polishing shoes? I don't know, but I love this little glimpse of the past. 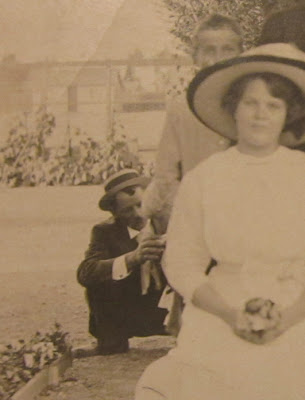 If I'm not remembering incorrectly, the young lady in the following two pictures is Karin, my grandmother's aunt. I adore her pretty face, the curls in her hair and the slightly naughty look on her face! The first photo is from 1919, the second I'm guessing is a bit earlier. 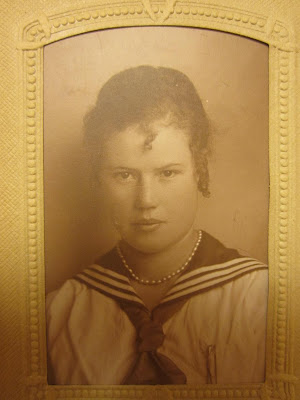 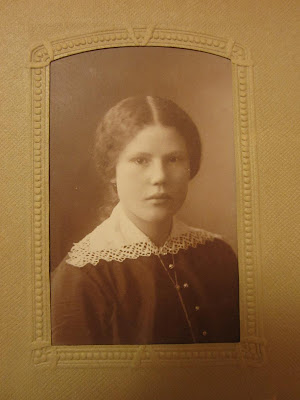 This lovely gathering I don't know much about. They are sitting in front of "J Erikssons skoaffär" - J Eriksson's shoe store. Since my great grandfather was part time shoe maker, and I think his father was a full time shoe maker, I'm guessing this was their old store. I don't know exactly where this house is located though, and I'd love to visit it some day if it's still there! 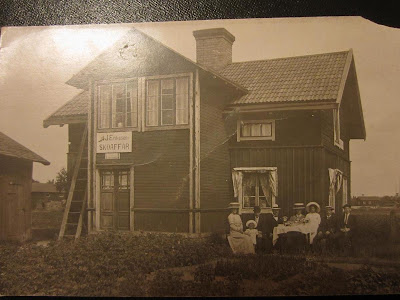 Look at this close up... isn't it lovely? 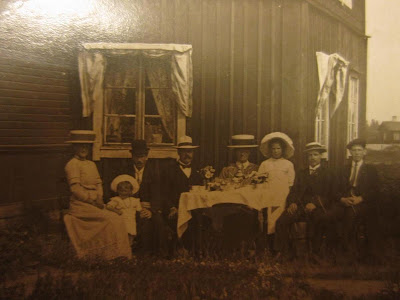 These three ladies I don't know anything about, I'm afraid. But they are in our old family album so I guess they are relatives. So beautiful! 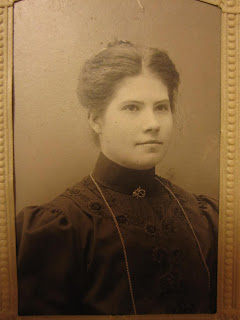 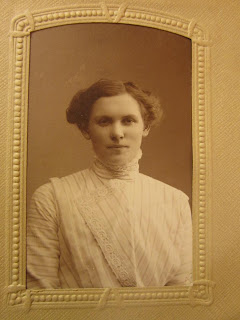 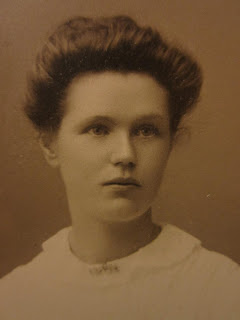 Some day I'd love to get in touch with the part of the family that moved to the US. Though I'm afraid that might never happen, as I think grandma has lost the information, all names and adresses. But I guess nothing is impossible, and who know... one day they might come looking for us?