Early in february we started our first batch of mead, full of anticipation. The mead produced by our friends has been absolutely delicious, and since february we've been hoping for a similar result.

The recepy used was found here, at Kalle Runristare's homepage. However, we only had a 10 liters plastic bucket available, and to be honest it felt good NOT making 25-30 liters of mead at the first attempt... So we only made some 6-7 litres.

Ingredients according to the original recepy:
17 liters of water
3.5 kg of honey
Yeast (we used wine yeast)

Then, as suggested by Kalle Runristare, we added just a few pieces of apple to help the fermentation process.

After a few weeks we opened the bucket and were shocked to find MOULD! Mostly on top of the pieces of apple, and it seemed to be only at the surface... So we very gently removed the apple and the mould, added even more honey, resealed the bucked and hoped for the best. Next time I think we'll skip the apple... or remove the pieces just after a day or two.

A couple of weeks later we inspected the mead again and found NO mould whatsoever (what a relief!)! However, the mead tasted... like yeast. And a bit of alcohol of course! But mostly just yeast. Not so tasty.

So we let it rest some more! And today, on the 15th of May, we finally bottled the mead. It now tastes a whole lot better then the last time, though still with a rather large hint of yeast, but hopefully it will just get better. Now awaits further rest for the mead, and in a month or two we'll get to drink our very own mead! 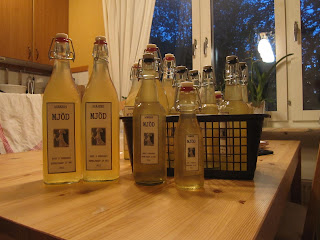 And, yes! I will definitely come back with a review in a few months when the taste (hopefully) has improved further!
Posted by Fanny at 1:53 PM