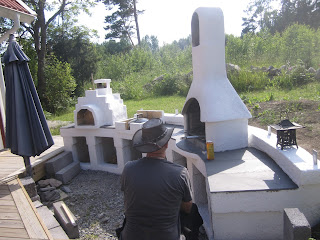 This will be a picture heavy post, because I am just so ridiculously happy and proud over our lovely outdoors kitchen and need to show it off. To be perfectly honest it is not entirely done, there still is some sort of proper hatch to be created for the oven, and some kind of stone/brick floor needs to be put down, but... look at this! Marcus really did an amazing job with it. And oh yes, a couple of steps will also be built to connect things. It's almost done, alright! 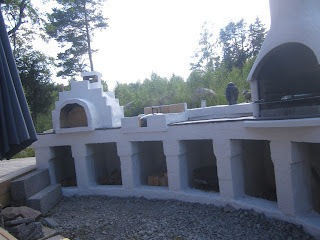 
The grill is a commercial pre-case concrete thing, assembled on top of the counter (we just left the bottom half out, not needing it). 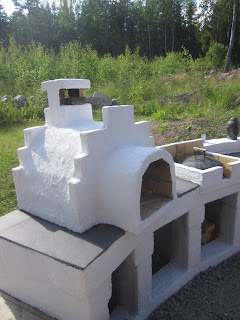 The oven was built using fireproof bricks (I think it's just a work of art personally, I love that oven!) as was the thing there to the right of the oven that we call the hearth. 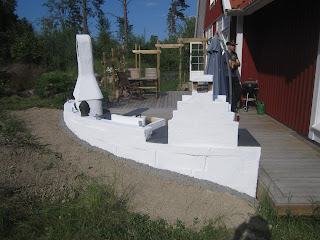 Everything was covered in... Ah. The dictionary says plaster, but I don't think that's an entirely correct translation. Cement based... puts. Hnngh. Ah well! Hopefully you understand what I mean! 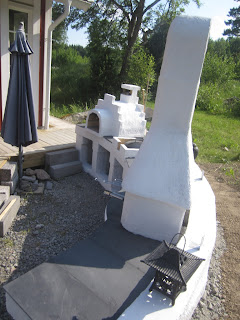 The surface was then painted white, and slabs of slate put in place. For a long time we thought of alternatives there, we were at first thinking of using the same tiles we have in the kitchen for example, but then in the end we decided that clean slate would be best. 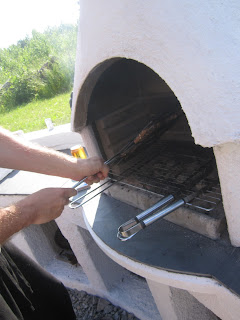 The grill is seeing a lot of use already. This picture here to the left you see it being used to make burgers, for example! The "hearth" we have still only used twice but it works wonderfully as well. The oven I am still working on getting the hang of, it's not as easy as one would think! I have managed to bake some simple flatbread in there and next step is to try making pizza (of course).

There you have it, our outdoors kitchen!
Posted by Fanny at 2:01 AM